I’ll write a bit more on this topic soon, but wanted to at least drop a brief note before I find the time for a real article: I’m talking about the “active-cooled” Xeon Phi SC7220A PCI cards – they really do exist! They do pretty well (around 3000H/s on crytponight heavy/sumo). And yes, I finally got my hands on some!

In past articles I’ve called them “rare”, “rumored”, and in one instance even “as elusive as a two horned unicorn” when somebody mentioned he might have one (turned out he didn’t, it was something else). I had heard that there’s three models of the Phi cards – the passive 7220P and 7240s, and the active 7220As – but so far had never ever gotten at anything other than the 7220Ps. Not the 40’s, and certainly not the active ones. In fact, until somebody listed an “A” on ebay the day before yesterday I had never even seen an image of one. Yet finally, I got my hands on some. Wow. That took a while.

Why is this such a big deal? Until today, all I ever had for phis was either the 7220Ps, or the bootable 7210/7250s (Asrock, Colfax, etc). The latter ones are great if you’re building a farm or want to go co-location to a data center – I have some, they’re great, and I recommend them to everybody that goes that route. But – they’re somewhat less interesting for the “home miner” that is used to building his own mining rig “GPU style”, with a cheap motherboard, CPU, PSU, minimum RAM, and just plugging in a PCI card.

The 7220Ps I got a while back on ebay are “kind of” going in this direction, but as described in my two past posts on this topics (e.g., the original one on building a desktop mining rig and last week-end’s one on putting 7220Ps in surplus servers) I had already pointed out that those passive cards need a lot of really strong airflow to stay cool (well, at least once you start the miner :-/). And that, for regular desktops or mining rigs, is simply not the case – and once they overheat, they’ll turn off, you’ll simply see “DMA error”s in the dmesg, and can power-cycle.

Mounting additional high-powered fans as I had done in my desktop rig is a solution for a “proof of concept”, but only borderline practicable. With an “A” (ie. “active”) card, though, the card itself has a fan – just like a GPU – so cools itself … meaning you can actually mount it in a desktop, workstation, or free-standing rig – I now had my first machine running about 48 hours, and still going strong (2 cards in one box, together about 6500H/s on sumo). Of course you still need the right mobo that it’ll work in, but that’s something for another post – I now have two machines where I have A’s working in, and at least two other users seem to have that, too, so “we’ll figure it out”. Luckily this experimenting will be relatively easy, because the mpss-knl lustick I did for the servers seems to work just as fine with desktops… and that saves a ton of time.

Anyway – for now I got a stack of those two-horned unicorns (and a few 7240P’s, too, for good measure), and will start experimenting with them. Already ordered a range of different mobos and CPUs to test with, and will certainly keep everybody updated on that through this blog. Also, I won’t be able to power all those cards myself, so will soon start to sell some off on ebay (also get my investment back – I did have to pay for those cards :-/). If you see some appear in the ‘lukMiner’ ebay account – then yes, that’s I (and of course, you can also drop me an email if you want to save the ebay fees).

At least so far that’s it – will soon update you guys on which rigs I get them to work in and which ones not. ASAP, I promise (weekend, probably – I do have a day job).

Until then – happy mining! 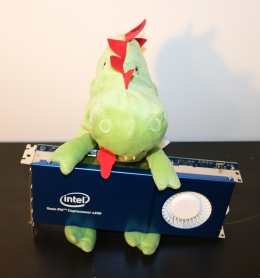